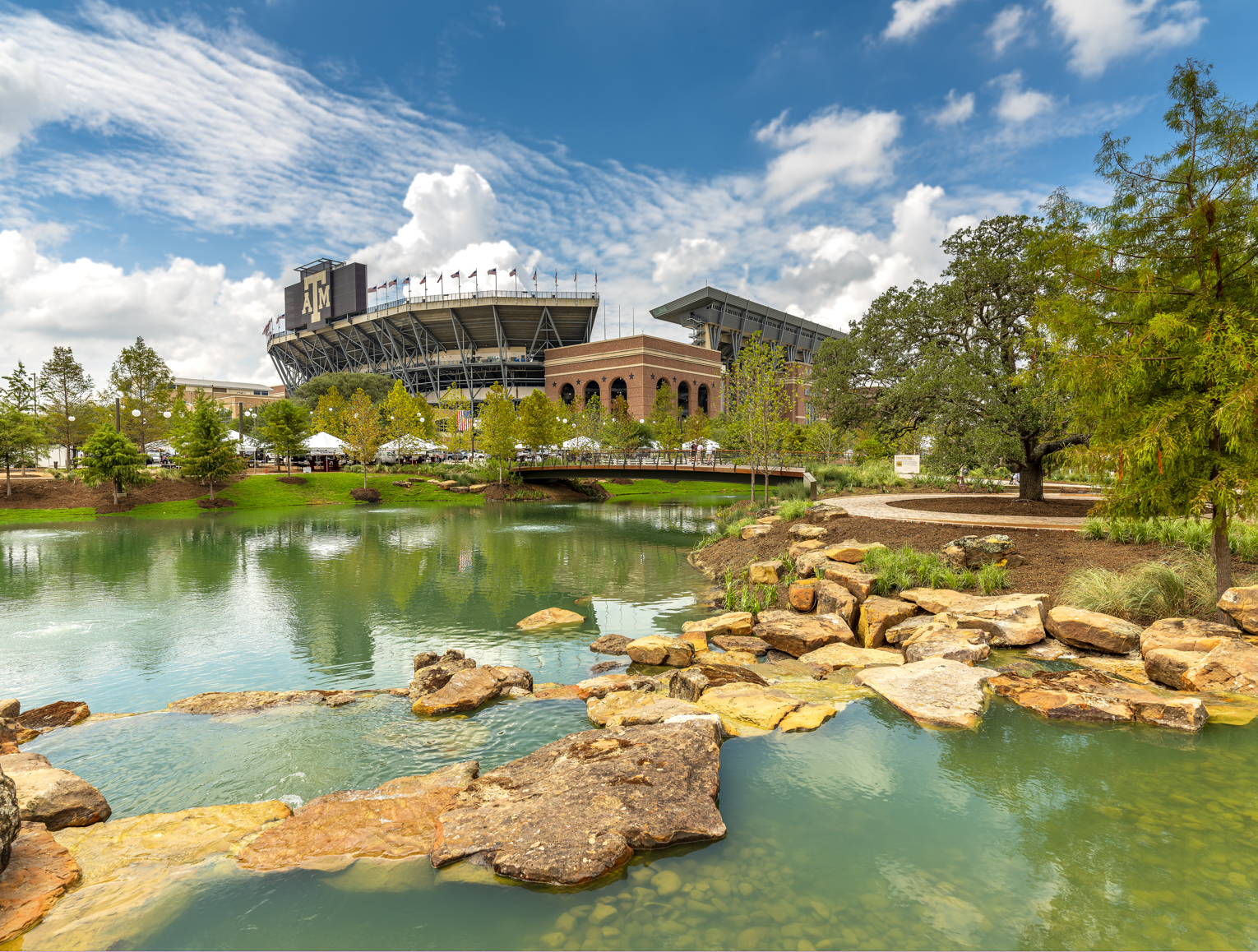 Doug Beall was first in line to check in to tailgate in one of the hundreds of free, reserved tailgating spots in the new Aggie Park on Saturday morning ahead of Texas A&M football’s season opener against Sam Houston State.

Beall, A&M Class of 1988 and a former Yell Leader, said he got to the park at 6:30 a.m. He and the three families he tailgates with were able to check in together and get four spots next to each other in a prime spot in the new War Hymn Lawn with Kyle Field’s east side square in the background.

After two seasons of restrictions and renovations, tailgating has returned to the space now occupied by Aggie Park across from the east side of Kyle Field. There’s a twist on football’s favorite pregame pastime in Aggie Park, though. Reservations — free or paid — are required to tailgate in the park.

A&M officials announced in June that reservations would be required for all tailgating locations in Aggie Park starting this season. Fans are using a vendor — Revel XP — to make free and paid online reservations. This system has replaced the long-standing “land rush” where fans frantically claim their tailgating spot after an air horn sounds at noon the day before A&M home football games.

“We used to enjoy the land rush. It was just part of the tradition, but we’ll see. It’s the first time. Everyone’s working out the issues. I’m pretty confident it’ll get smooth and we’ll enjoy tailgating here,” Beall said.

Tailgating was prohibited in 2020 due to the COVID-19 pandemic and unavailable in Aggie Park during the 2021 season due to construction. Old land rush policies continue for tailgaters at all other campus locations.

Jason Hansen, a sophomore at A&M, is the tailgating chair of the student organization Brotherhood of Christian Aggies. His elected position required him to do the virtual land rush process for the group to get its tailgating spot.

Hansen woke up at 5:30 a.m. and arrived to the park at 6:45 to claim two spots. He and several others spent the morning cooking over 200 breakfast tacos. While Hansen said the new process could prove more difficult, he sees it as beneficial for tailgaters coming from out of town.

“It’s hard on us because the rush process and the claiming of spots makes it hard to confirm that you have that spot,” Hansen said. “It’s also hard to make sure you have enough space, but it’s great for these people that are out of town.”

Neil Peltier, assistant director for A&M’s University Center & Special Events, said over 200 requests for free tailgating spots were made ahead of A&M’s opener, which the Aggies won 31-0. He noted they were able to accommodate everyone who submitted a request.

Virtual land rush opens at 6 p.m. Sunday. Tailgaters submit their contact info online and request up to two spots in Aggie Park. The registration link stays open until 5 p.m. Tuesday. On Wednesdays, tailgaters are told how many spots they received and are given a general location of where the spots are, which are split into zones. Tailgaters check in at a tent off Throckmorton Street beginning at 7 a.m. Saturdays. After check-in, they are escorted to their spot and are filled in order.

For tailgaters hoping to be next to each other, Peltier said they are encouraged to check in together and have spots in the same zone. He noted the tailgate crew is trying to be as accommodating as possible.

“We’ve gotten phone calls from a lot of people this week about trying to do that, so we’re going to make every effort to make that possible when we can,” Peltier said about people hoping to tailgate together. “If people have reservations in different zones or they’re checking in at different times, then it’s just not feasible for us to be able to do that. If we’ve got multiple families that have spots in the same zone that check in at the same time, then yeah, they’re going to end up being right next to each other.”

As Hansen noted, Peltier said the main goal of the new virtual reservation process is providing a way for out-of-town fans to get a good tailgating spot without having to worry about being in College Station on Friday afternoons.

“Without the physical land rush, it allows us to keep the park in a much nicer condition and we are minimizing some of that tension of people arguing, ‘That’s my space.’ ‘No, I always tailgate there. That’s my space,’” Peltier said. “Now it truly becomes a little bit more of you’re going to get your space when you show up on game day. We’ll give you an approximate idea of where you’re going to be. I’m just hoping more people get to engage with this park than ever before.”

A&M graduates Dan Sparks and Chris Cokinos were at the Front Porch tailgate, one of the paid reserved spots in the Houston Street Groves. Cokinos said he thinks the renovated park will help A&M become the nation’s top tailgating spot. Sparks said he’s tailgated with a group of 15 men for years. They used to be behind the Bright Football Complex, but were moved for this season. Paid reserved tailgaters are able to claim their spots by game or an entire season whereas the free tailgating spots must be reclaimed each week.

“Knowing where we’re always going to be is nice,” Sparks said. “It’s convenient for us. We all know where we can meet up and we can tell all of our friends to come and our family, so it’s nice.”

On Saturday morning, a group of A&M administrators, personnel from The Association of Former Students and others gathered to dedicate the park. Brad Freels, CEO of Midway, the real estate firm that developed Aggie Park, said over 700 trees were relocated and planted in the park. That includes 120 maroon elms that are expected to turn maroon in mid-October and into November. Marty Holmes, vice president of The Association of Former Students who has overseen the development of Aggie Park, noted the park will have a larger reach than on game days, though.

“It’s going to make tailgating fantastic, no doubt, but this is not about tailgating,” Holmes said about the park. “This is about our students 365 days a year. It’s about recruiting our best students, our best athletes and giving them a chance to see what A&M is about.”