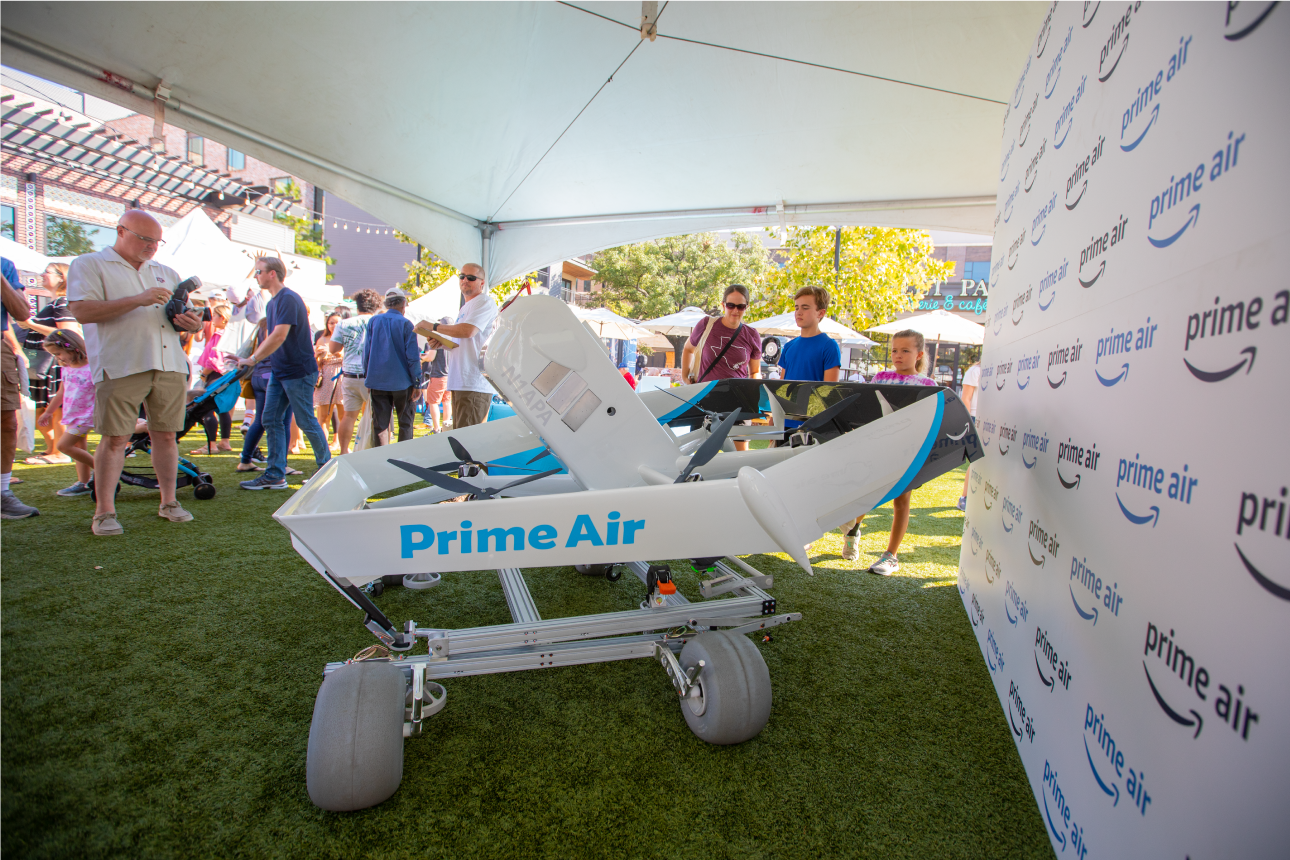 Amazon Prime Air Drones are officially in College Station and, according to some residents, the drone is bigger than expected after seeing it in person for the first time at City Hall on Tuesday night.

“The drone is bigger than I thought,” College Station resident Jarrod Tanton said at the viewing. “It can’t lift as much as I thought it could so it is a little bit weaker, but I am pretty interested to see how it works. Since it is bigger than I thought, I could see that there has to be some good systems in place, but I think the technology is pretty solid at this point for drones.”

Tanton lives in the Pleasant Forest neighborhood and said he hopes he is eligible to use Amazon Prime Air to order small items for his office.

The Amazon Prime Air Drone Facility was approved to be in the city limits after the College Station City Council unanimously OK’d a zoning proposal, which would allow Amazon products of a certain criteria to be delivered directly to people’s homes via drones. The facility is located at 400 Technology Parkway along Texas 6 near Texas Avenue. The drones can service homes within a 4-mile radius of the facility.

Paul Butler, an Amazon community affairs manager, was one of the many company representatives present at the viewing and answered questions from visitors. He said the drone is about 7 feet wide and can carry up to 5 pounds in a box that is about the size of a shoe box. The drone that was at the viewing, weighed about 80 pounds and has six propellers, he said.

“The drone will take off and then hover in a customer’s back yard and safely deliver that package from the drone about 4 meters [13 feet] above the ground,” Butler said. “When it gets to cruising altitude of about 300 to 400 feet in the air, it changes and kind of flies like an airplane to its destination. When it gets above the back yard where it is going to deliver, it will go back to this [stationary] format and slowly descend. It will make sure there are no obstacles and it is safe to deliver the package.”

Butler said Amazon Prime Air is in the process of measuring the noise level of the drones and will follow the guidelines made by the city’s local noise ordinances, as well as federal regulations with the Federal Aviation Administration.

“We will abide by both of those to make sure we are in the appropriate regulatory range,” Butler said. “This takes off and flies at 300 to 400 feet, so the noise decibel won’t be as audible when it is that high. But when it delivers you will be able to hear it and it will be similar to what you hear in a normal neighborhood from a day-to-day perspective. It will quickly deliver the package and then return.”

During the viewing, Butler said many people approached him asking questions about the drone’s size and noise level, and were also excited to see the drone in person.

“We are making sure we are really good neighbors as a company. Our services are for new and innovative technology so we wanted to hear directly from the community members to make sure that we are listening to their feedback, and answering any of those questions that they may have about our service,” he said.

Matt Prochaska, the president/CEO of the Brazos Valley Economic Development Council, was present and said he was excited Amazon fulfilled its promise of coming before the end of the month to show what the drone looks like in person.

“They are very community focused, and they have already reached out to some of the nonprofits that we are working with in the community, and for me that is just inspiring to see a company follow through,” he said. “Not only on that but on the other things; everything they have said that they will do, they have done, and it is pretty encouraging to see that.”

Sonia Poston, a resident of the Shenandoah neighborhood, said she and her family are in support of the drones being in town.

“We think it is exciting, and to know we are kind of the first people experiencing it is exciting,” she said. “I think [Amazon has] enough money to do testing and develop it to ensure that it is probably safe.”

“The fact that Amazon invested in our community, not only at the community level but also at Texas A&M; they have made a huge commitment to our community and it is impressive,” she said.

As far as a timeline, Butler said Amazon is working to get the buildings ready for the facility on Technology Way, and plan to be delivering to customers in College Station later this year.

Residents can view the drone in person once more from 9 a.m. to noon Aug. 13 at a Prime Air Share Breakfast at Century Square in College Station.